The debut Sofubi Galaxy People release is less than a week away!

Three figures; Meklops, The Grappler and a new hero Helios.

While numbers are very limited a few sets will also be held back for a web release at 11:00pm, 28th July (Japanese Time) on the Galaxy People store site. 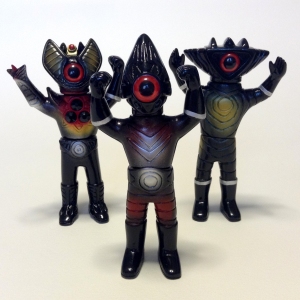 Flashback to April 2018 lucky bags. First and last appearance of the Prophetic Curfew Monkey.
Ambush! Skreel’s back in town in chocolate brown! Limited to just 6, this version coincides with Japanese White Day- a kind of second round of Valentine’s day. He’s up in the store now. Grab him at www.store.galaxypeople.toys #scifi #valentinesday #sofubi #whiteday #galaxypeople #looksdelicious #wouldprobablykillyou
Now running at 25% reduced wisdom.
One from way back. The original resin Drexyl.
@nocturnallygeekyme and @davidjcoffman have a booth at Dcon, and were kind enough to ask if’d work on a toy/ print collaboration with them. They’ve perfectly captured Sensorbat’s rarely seen cuter side in this digital print. They’ll be at booth TD3, but head over to @davidjcoffman ‘s instagram page for more details about this and their other collaborations.
Design Festa toys are now up now in the webshop! #galaxypeople #designfesta
Design Festa is go!!! Saturday/ Sunday booth M-679 #galaxypeople #sqdblstr #kanakanie